Far north in the Scottish Highlands, the counties of Sutherland and Caithness define the furthest boundaries of mainland Scotland. The word “sutherland” is derived from Old Norse suðr land or “suthroen”. Sutherland lies to the south of Iceland and the Viking colonies on Orkney and Shetland islands. Sutherland represents both a place and a people. Pictish tribes lived in the area before the Romans invaded the British isles. Over time, many people took on the name of their homeland. 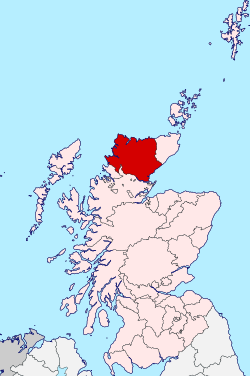 The first recorded spelling of the family name is shown to be that of Davie de Sothirlandae, This is dated 1332 in the rolls known as the ‘Register of the Holy Trinity Monastery’, Scone.

The first Earl of Sutherland was Hugh de Freskyn, a Flemish knight who received a land grant from David I of Scotland (1084-1153). Freskin and his immediate descendants went by the name de Moravia (because they intermarried with the house of Moray). One of Freskin’s grandsons founded Clan Sutherland. Another grandson founded Clan Murray. Sutherland chieftains eventually adopted the clan name as their surname.

[Freskin] was given a commission by King David I of Scotland to gather the Sutherland Gaels together and clear the Norsemen from the area, and he received Strabrock in West Lothian and Duffus in Moray from King David I of Scotland. Some hold that he was therefore probably the hero of the clan legend about the killing of the last Norseman. The crucial battle took place near Dornoch where the Norse chief had gathered his men in an attempt to stop the Scottish advance. The fight at first went the Norsemen’s way when they penetrated the Scots formation and the Sutherland chief was injured. As the chief lay wounded though, he spotted a Norse general coming up to support the attack. Finding a horseshoe at hand, he threw it with all of his might, striking the Norseman squarely in the forehead, killing him, and turning the whole battle around. By the end of the day, all of the Norsemen had been killed or captured.

The Earls of Sutherland have a long and colorful history. William, the 5th Earl of Sutherland married into the Scottish royal family. He was captured with David II after their defeat at the Battle of Neville’s Cross (1346). They spent 10 years in an English prison.

In 1517 Elizabeth Sutherland, 10th Countess of Sutherland married Adam Gordon. For two hundred years, the chieftain of Clan Sutherland was a Gordon. In 1719, the 16th Earl of Sutherland took the surname of the clan.

In addition to the Earls of Sutherland at Dunrobin, the family includes minor lines: Duffus (their land contains the original fort built by Freskyn), Forse, and Killipheder.

When the 18th Earl of Sutherland died in 1766, his daughter Elizabeth inherited the title. Other family members disputed her right to the earldom. Sir Robert Gordon and George Sutherland of Forse both presented genealogical evidence of their claims.  In 1771, the House of Lords voted that the title should remain with Elizabeth. As a result of these lawsuits, the Sutherland line has been well documented back to Freskyn. Even illegitimate children were included in the records.