Although Dunrobin is the most famous castle associated with Clan Sutherland, other castles and fortresses in Scotland are connected to the family.

Dunrobin is the ancestral home of the Earls of Sutherland. The castle underwent massive remodeling in the 1800’s. The 2nd Duke of Sutherland engaged the famous 19th century architect, Sir Charles Barry, to redesign the ancient structure (including a tower dating to the 1300s) into the Scottish baronial style. An image of Dunrobin before the renovation in 1845 can be seen here => ‘Dunrobin Castle, Sutherlandshire’, William Daniell | Tate

The castle is still owned by the Duchess of Sutherland and has been opened to the public since 1973. It is one of the top tourist attractions in the Highlands. Approximately 100k visitors tour the grounds every year.

Duffus Castle was built by Freskyn, the founder of the Sutherland line. After David I awarded lands to Freskyn, he built a timber fortress on the site.

The timber castle was burned by Robert the Bruce in 1297. Sir Reginald Cheyne built a stone tower in the early 1300s. The land passed to the Sutherlands of Duffus in 1350. 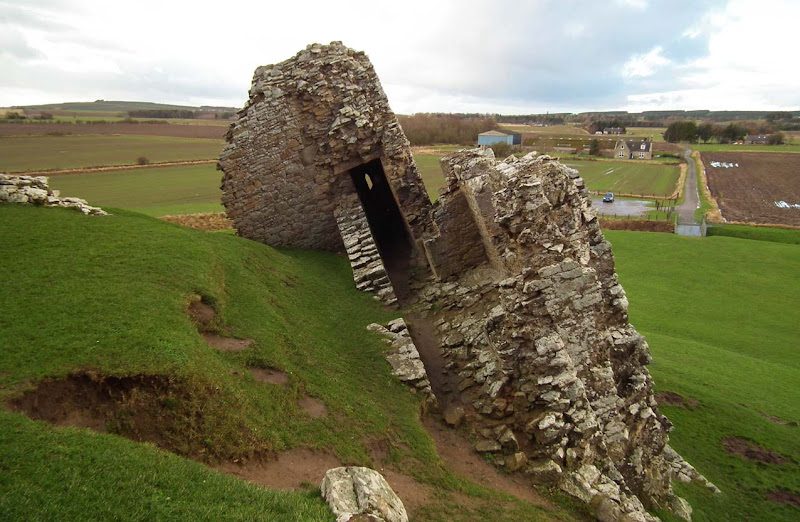 The tower mound at Duffus was unable to sustain the weight of the massive structure. The stone building suffered a partial collapse, possibly in 1640 when the castle was sacked by Covenanters. Although there were efforts to repair the castle, it was abandoned by 1705 . The ruins are now managed by Historic Scotland. Skelbo Castle has similar origins to Duffus Castle. Although the architect is unknown, similarities to Duffus suggest that Freskyn himself may have constructed a timber motte and bailey castle on the site.  The Moray (or Murray) clan controlled the castle until the 16th century. A stone keep was constructed in the 1300s.

Skelbo’s footnote in history – in 1280, Scottish Commissioners gathered at Skelbo awaiting the arrival of the new Scottish queen, Margaret of Norway. The seven year old queen died on the journey. Her death set off the Wars of Independence.

Skelbo returned to the Sutherlands in 1529. Presumably the castle was in poor condition by then because a large house was constructed near the castle walls. Sutherlands of Skelbo were Jacobites who lost their lands during the forfeitures following 1745.

Skelbo ruins can be found at the end of a trail that winds through a pasture near Loch Fleet. Historic Scotland has implemented emergency repairs to prevent further deterioration at the site.

Forse Castle dates from about 1200 AD. It was controlled by the Cheyne clan until 1400 AD when the land passed to Kenneth Sutherland. 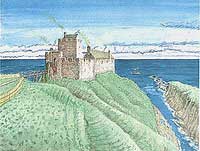 Sutherlands of Forse lived in the castle until 1660 when they built a house further inland.

The castle sits on a cliff high above the North Sea. The ruins are largely inaccessible and little remains of the original structure.