Charles Wesley’s father, Isaac, was born in Washington, NY in 1802. Sutherlands had lived in Dutchess County for over a hundred years but the family would soon move west.

The Louisiana Purchase in 1803 and the completion of the Erie Canal in 1821 meant that Isaac was born in a time when the whole country was on the move. His father, Roger Sutherland (1775-1843), brought the family to the Indiana frontier around 1818.

Isaac married Sylvia Hackett in 1822 and spent the next seventeen years in Indiana raising his family. Sylvia died in childbirth in 1834 leaving Isaac with five children, aged 2-12. Margaret Keerns was widowed in 1835. She and Isaac married in 1836. Margaret and her three children, Robert, Lavinia, and John, moved into the Sutherland household. Six more sons were born to Isaac and Margaret. The youngest was Charles Wesley.

A few years after their marriage, Isaac and Margaret moved to Illinois. In A History of Bureau Township, Isaac Sutherland is mentioned as one of the founding settlers. I believe that another settler, J. Sutherland, was Isaac’s youngest brother Abraham J. Sutherland (b. 1817).

Isaac was one of the first school trustees in Milo, Illinois. In 1850, he was named postmaster. His children grew up and started families of their own in Bureau County. Two sons, William Harrison and James Hiram married Gudgel sisters, Ellenor and Maria. Robert Keerns married Sarah Jane Gudgel. Maria Sutherland did not marry until the family relocated to Iowa. She lived with her parents for most of her life.

The family spent thirty years in Illinois. By the 1870’s, the promise of land to the west brought the Sutherlands to Iowa. His sons moved one by one, starting with Lemuel Roger. Lemuel’s daughter, Ada, was born in Guthrie County in 1869. Guthrie County is about 50 miles west of Des Moines. William Harrison was living in Story County by 1872. James Hiram had moved to Benton County NW of Des Moines a year later.

We don’t know exactly how Isaac and Margaret came to Dallas County but his son Darius was living in Adel, IA by 1880. Isaac moved to the state sometime between 1874 and 1877. He died May 4, 1877 and is buried in Adel. 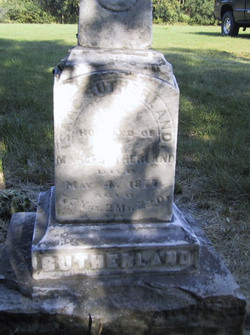 Isaac was part of the great westward migration in the 19th century. He traveled a thousand miles during his lifetime. Lived in four territories/states. Fathered twelve children and raised three stepchildren.

He was laid to rest in the Van Fossen cemetery in Dallas County, Iowa.