The children would have been the following ages:

Ellen had probably never seen a city bigger than Des Moines. She had lived in Adel since she was a child. She must have asked her brother, Clinton, to drive them to the train station. When the children and their few belongings were loaded, she said good-bye not knowing if she would ever see him again. The railroad journey to Louisiana took them through Kansas City and Memphis. Nearly a thousand miles.

They were living in Welsh LA in 1895. RC and Clint supported the family by picking cotton for 25 cents a week. Viney and Nell would have helped out by working for local families. They may have originally planned to homestead in this area but settled instead near the west fork of the Calcasieu River.

By 1900, they were living on homestead property in Calcasieu Parish. The 1900 Louisiana census records Nellie Sutherland, 14, working in the home of the Mudgett family in Lake Charles. The census worker noted that she was at school when he interviewed the family. Nell must have worked after attending classes at Central High School on Kirby Street.

Tragedy struck that same year. Nine year old Leroy was kicked by a horse and died. He is buried in a small cemetery near Dunn Ferry Road. 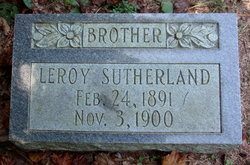